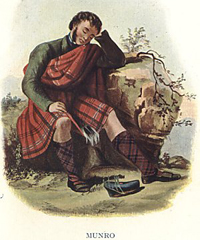 The word tartan most probably comes from the Old French tartaine meaning the composition of a fabric i.e. a mixture of cotton and linen but by the time it was adopted in 16th Century Scotland it's meaning was already shifting to the pattern of a cloth. A Clan tartan is recognised by the pattern or sett. The arrangement of colours is calculated on a thread count, which is the same for the warp as the weft i.e. horizonatal and vertical. This means that no two pure colours can lie next to each other.

The weave used in tartan is called twill, the thread going over two and under two which, by moving along one thread of each row, produces the characteristic diagonal rib in the material. The size of the finished design varies with the thickness of the thread - silk shows a very fine pattern so that tartan made from it will have a much smaller sett than that from wool used to make kilts and skirts. The weaver can also increase or decrease the scale, provided he or she maintains the proportions.

Added to differences in size, variations in colour can be very marked as they would have been with vegetable dyes. In fact there is no correct or standard shade of red, blue or green, etc., and this can be left to the whim or taste of the wearer or manufacturer, but to give the best effect the colours should be balanced so that no one colour predominates. Nowadays the dyes are classified as 'modem' using strong colours; and 'muted, weathered or ancient' where the shades are generally dull and brownish. But for all these tartans, which may look quite different, the basic sett remains the same. Clans with bright tartans, such as the Munros, also have a dark or 'Hunting' tartan which may have a different sett and which is based on dark green or brown, and which also appears in different dyes. The Munros wear the Black Watch, 42nd, or government tartan as their Hunting sett, as do several other Clans.

The concept of a tartan used exclusively by one Clan seems to have evolved in the 19th Century, after the wearing of tartan was proscribed between 1746 and 1784. During that time only the Highland Regiments were permitted to wear tartan which may have led after 1784 to the drive for uniformity. The sett of a tartan can never have been a practical early source of identification, as the variations are too slight to have been visible at any distance. Surviving pre-1745 portraits of figures depicted wearing tartan support this, often showing the sitters wearing more than one pattern at the same time.